Decatur residents who enjoy a low cost of living, short commute times and a convenient, central location think Chicago is a great place to visit, but they don’t want to live there. A short getaway to the “Windy City” is appealing, since getting there from here is easy – just a three-hour drive or 80-minute flight to O’Hare on Air Choice One.

Chicago is a collection of 200 unique neighborhoods with popular regional specialties that reflect its ethnic roots – the city is famous for deep dish pizza and Chicago-style hot dogs and an unrivaled metropolitan restaurant scene.

Sporting events are a magnet for fans of professional football, hockey, basketball…and baseball. The Chicago Cubs are the oldest Major League Baseball team still based in their founding city. The Cubs have played more games, had more wins and scored more runs than any other team since 1876, and finally brought the World Series trophy back to town in 2016 after a 108-year absence. The Chicago Bears have won more games than any other team in NFL history and will celebrate their 100th anniversary in 2020.

The cultural arts in Chicago are popular, too, with art galleries, museums, theatres and parks playing host to hundreds of exhibits, festivals, concerts and special events year-round. The 34th Annual Chicago Blues Festival June 9-11 in Millennium Park and the Taste of Chicago July 5-9 in Grant Park are two of the most popular.

Even though Chicago residents may enjoy a plethora of entertainment choices, there are challenges associated with living in the 3rd largest city in the country.

Chicago is the county seat of Cook County with a population of 2.7 million, which translates into 11,953 people packed into each square mile. Almost 200,000 people travel into the city for work every day, resulting in 45-minute average commutes, compounded by traffic congestion that is one of the worst in the country.

“Chicago has the second longest average commute time behind New York, a reality which has begun to impact quality of life and economic well-being of the region and the state,” says U.S. Senator Dick Durbin-IL.

But, the congestion is not just limited to the roadways. Chicago is also the largest freight hub in the railroad industry – one-third of all U.S. freight trains pass through the city. Known as the “bottleneck of the nation’s rail system,” infrastructure improvements over the past 14 years have reduced delays by just 30%, with only 22 of 70 projects completed due to the lack of funding.

The median household income in Chicago is $45,214 and the median home value is $310,870. With a cost of living index of 107, average housing costs in Chicago are much higher than a home with the same amenities in Decatur that benefits from a cost of living index of only 84. When we compare the most expensive homes currently listed for sale in both cities, the difference is dramatic. 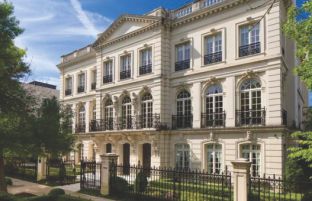 This article originally appeared in the June/July 2017 issue of Decatur Magazine. It may not be reproduced or redistributed in whole or in part without the publisher’s consent.