When Jeff and McKenzie Sloan bought their lakefront home on Southmoreland Place in Decatur four years ago, they appreciated both its great view and great potential.

But while the spectacular view could not be improved upon, the steeply sloping backyard needed to be totally redesigned with the Sloan’s two young daughters in mind.

And foodie Jeff wanted a dream outdoor kitchen to house his many cooking appliances.

There are at least five different appliances, and I think they all know how to smoke a piece of meat.

“My husband has all these outdoor toys that he cooks with, and they were just randomly placed out there on the patio,” says McKenzie. “We decided to clean it up and redesign it so that all those things would have a home. There are at least five different appliances, and I think they all know how to smoke a piece of meat.”

To do the work, the couple called on landscape designer Jared Cothren of Custom Landscapes. Cothren began working on the Sloan’s property in 2012, when he removed railroad ties from the front yard and re-landscaped it, trimming the existing cedars and adding shade-loving hostas.

Last spring and summer, Cothren redesigned their back yard, creating terraces supported by softly curving retaining walls. Now, a level area bordered by boxwoods, which will one day form a hedge, provides the perfect play space for the Sloan’s daughters. The flow of the stone walls complements the gentle curve of the lakefront, adding the pretty factor to this practical solution.

This spring, the couple’s project was Jeff’s custom outdoor kitchen. 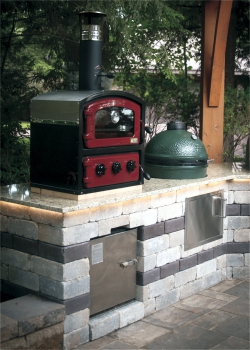 “Things are really trending toward outdoor living,” says Cothren. “People that have been in their homes for five or ten years are ready to add on and use their yards as living space — and outdoor kitchens are a great way to do that. Another trend that’s caught on is pavers, which are actually better than concrete.”

Pavers are not just more attractive than concrete, explains Cothren. They also are more forgiving when exposed to temperature extremes, and new types of pavers retain their color longer. With that in mind, he removed all of the concrete from the former patio location at the side of the Sloan’s house and started from the ground up with about 600 square feet of pavers.

The Sloans chose their earth-toned outdoor kitchen materials based on the suggestions of Cothren and his mother Teresa Cothren, owner of Custom Landscapes.

“We have a lot of earth tones — the house is taupe — and Jared and Teresa were good at not letting us stray too far from what had already been done,” says McKenzie.

Once the pavers were in, custom cabinetry was built in a half-hexagon configuration parallel to the house. Each opening houses one of Jeff’s appliances, including a pizza oven, a Green Egg grill/smoker, an electric smoker, a Fire Magic grill, and a wok burner featuring a 65,000 BTU burner — perfect for wok cooking and also for seafood boils. Next to the appliances is a granite-topped island for prep work, in earth tones light enough to stay cool during the day.

“We used stainless cabinet doors under the appliances for easy maintenance and storage,” says Cothren. “We added a drop-in sink, so we ran the water, electric, and gas right out to the island. There’s power for extra outlets and everything.”

At the far end of the configuration is a little something special Cothren added with McKenzie in mind.

“I was worried about people standing around,” says McKenzie, “so Jared came up with the idea of having a round surface at bar height so people have a place to stand or sit around and put their drinks down.”

At night, the kitchen area comes to life under tasteful lighting. A pergola structure above features a few lights — nothing too bright, but enough to light the area comfortably without being a distraction. The bottom edge of the countertop is lit with the latest in LED technology, a solid bar of light for a clean, modern look.

“Jared has practically become part of our family now,” says McKenzie. “We’ll have to come up with another project for him. But for now, we can enjoy our great view of the lake and have a lot of fun cooking out here.

“It’s a great house for entertaining, indoors and outdoors.”

This article originally appeared in the August/September 2014 issue of Decatur Magazine.
It may not be reproduced or redistributed in whole or in part without the publisher’s consent.
© Copyright 2014 Decatur Magazine – First String Productions. All rights reserved.