Before the dawning of “economic stimulus packages,” Grandpa had to put in a full day’s work before Big Brother would spare him a dime.

But back then, Pops had more pride than simply to accept a government handout to jumpstart the economy. For a full month’s labor on a Works Progress Administration (WPA) project —later renamed the more familiar Works Projects Administration — Gramps grossed an average of only $41.57. He would’ve had to work over half a year then to net the $300 minimum payment Uncle Sam is going to give him this go-round.

Bank failures and business closings created massive unemployment in the 1930s, when over 15 million Americans, or 25 percent of the labor force, were out of work. President Franklin Roosevelt initiated the WPA as part of his New Deal program to lead the country out of the Great Depression.

Rather than simply dole out welfare, from 1935 to 1943 the government hired unemployed workers to build bridges, roads, public buildings, parks, and airports. WPA Director Harry Hopkins explained the government’s philosophy: “Give a man a dole and you save his body and destroy his spirit. Give him a job and you save both body and spirit.”

Rather than let the Depression mar Decatur’s morale, residents seized upon the WPA initiative and poured additional funds into the city’s parks and recreation system. Demonstrating their commitment to wholesome community activities, Decatur voters supported a 1936 referendum to raise taxes for recreation — even in the midst of the Depression.

City leaders pooled the referendum’s tax revenue with WPA project funds to reshape Decatur’s landscape. Community centers, tot lots, and playgrounds were developed citywide, with the goal of placing a park within six blocks’ walking distance of every resident.

This dedication to leisure pursuits earned Decatur the designation of “Playtown U.S.A.” by the Athletic Institute. The Institute showcased our city as “an excellent example of community recreation” and featured Decatur in a circa-1948 booklet and a 25-minute promotional film.

See if you can identify these structures, all hidden in plain sight: 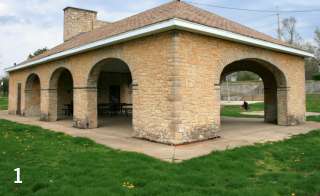 WPA Project #1:
This combination community center/park pavilion is located in an area once known as South Side Park, off a street formerly dubbed Broadway. The 42-acre tract was selected for use as a park, based partly on the fact that its south side offered over a half mile of lakeshore frontage. A March 1925 newspaper report mentions that the park was located “within easy walking distance of the business section of the city.”

Completed in 1939, this park’s $28,000 community center was funded partially with WPA funds, and supplemented by a generous $12,000 endowment from Mr. and Mrs. Adolph Mueller. An open air pavilion is attached to the castle-inspired main building, which features a turreted wall and several different roof designs including hipped, gabled, and flat.

The interior is said to boast a winding stairway to an exposed-beam second floor and features unique floral designs in the walls and tile floors. 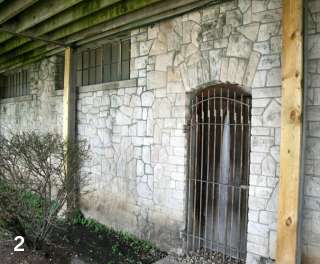 WPA Project # 2:
This circa-1939 structure appears to be the most versatile of Decatur’s WPA projects. It began life as a public bathhouse for all who came to swim or sunbathe at beautiful Lake Decatur Beach, but has morphed over the years into a privately owned restaurant/bar.

Clever WPA workmen fashioned some of the building’s stone blocks to resemble playing card symbols. Hint: You’ll see them on the south-facing wall. 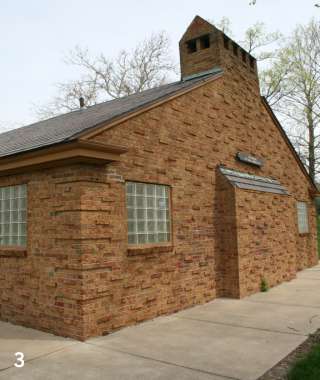 Visitors were no doubt relieved when finishing touches were added to this classy “comfort station” in 1936. Housed in the park formerly known as Camp Macon, the colonial-revival styled building serves double duty. Two narrow workrooms and a janitor-supply closet divide the structure lengthwise to segregate the sexes.

For more information on WPA projects, go to: http://www.wpamurals.com. Click on the “IL” link to view photos of murals created for the Decatur post office under the WPA’s Federal Art Project. When straight-talking WPA Director Harry Hopkins was quizzed on the necessity of federal support for the arts, he retorted: “Hell! They’ve got to eat just like other people.”

Contributor Kelly Wingard is proud to hail from a city that, historically, has placed a high premium on “play.”

This article originally appeared in the June/July 2008 issue of Decatur Magazine. It may not be reproduced or redistributed in whole or in part without the publisher’s consent.