Visit the Hieronymus Mueller Museum and you’ll step into the rich story of a man heralded as a creative genius, prolific inventor and community champion. Chapters, as viewed through Mueller Company’s lens, are historical snapshots only Decatur can share.

Within this panorama, the angle that Museum Director Laura Jahr finds most compelling — and is most fond of sharing — is the serendipitous flow that connected German immigrant Hieronymus Mueller to Decatur, the nation and, ultimately, the world.

“Hieronymus came to the United States in 1850, a time in history when the country’s infrastructure was in its infancy and the industrial revolution was ready to explode,” says Jahr. “There were endless opportunities for someone with an inventive mind.

“He lived the American Dream.”

Hieronymus moved from Freeport, Illinois to Decatur in 1857, and he and his wife, Frederica, raised six sons and one daughter. Trained as a machinist in Germany, Hieronymus started a small gunsmithing shop and soon added locksmithing and sewing machine repairs.

With a knack for understanding mechanical devices, he was an inventor at heart, a passion shared by his descendants. Combined, Hieronymus and his sons held a total of 501 patents including bicycle kickstands and wheels, sanitary drinking fountains, early versions of roller skates and, in the 1890s, automobile refinements such as spark plugs, reverse gears and water-cooled radiators.

But serendipity and success traced to what lie below — two major water-related inventions that created a niche for Mueller Company, which endures nearly 150 years later. 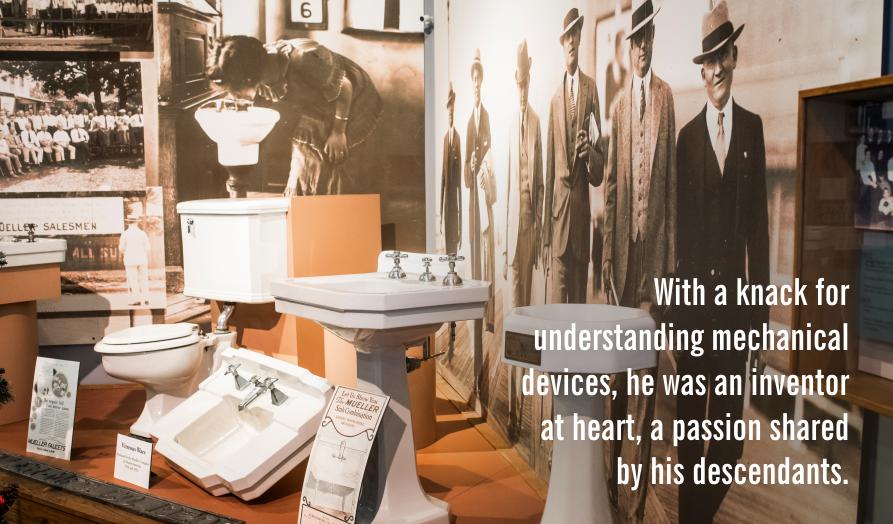 “When Hieronymus was hired as Decatur’s first city plumber in 1871, he discovered glitches in the way water moved from point A to point B,” Jahr says. His solution: A device known as the Mueller Tapping Machine. Patented in 1871, his groundbreaking invention was the first machine capable of drilling, tapping and inserting stops in mains under pressure. The Tapper revolutionized main water line access to service connections.

As a volunteer firefighter, Hieronymus saw firsthand the havoc that could result to pipes when water was moved, in large quantities and under heavy pressure, to a fire scene. Consequently, he developed a water pressure regulator, a device capable of receiving water at 50 pounds pressure or more and delivering it at a lower pressure as needed for residential use. Although it took eight years to perfect, the Mueller Water Pressure Regulator remains a key item in the company’s product line.

The “flow” continued into the 1930s, when Mueller Company acquired a fire hydrant manufacturer. Mueller engineers improved the product; many of the parts they designed are still incorporated in today’s hydrants. 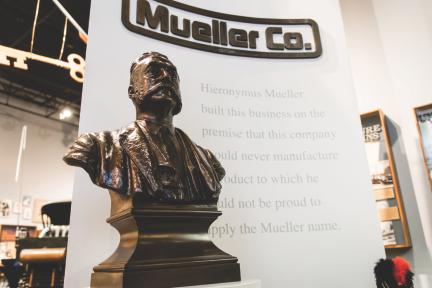 Although powered by water, Jahr also identifies brief “parentheses” in Mueller’s core business. Resulting from a reputation for uncompromising quality and excellence, Mueller Co. contracted with the U.S. Government in World War II to fulfill munitions contracts. Some product lines were suspended in order to manufacture 37 mm and 57 mm shells, and company engineers are credited for developing an armor-piercing shell that was used in North Africa to defeat Axis forces (Germany, Italy and Japan) led by German General Erwin Rommel.

A “parentheses” in Jahr’s book, automobiles might have been the next big chapter in Hieronymus’ story. In 1892, he imported a Benz automobile from Germany and, with his sons, refined it with innovations that would lead to patents. Three years later, Hieronymus’ “Mueller-Benz” won the nation’s first unofficial road race and finished second in the first official race held a few weeks later in Chicago.

“Hieronymus could see that the automobile was the up-and-coming thing,” Jahr says, “and he had eight blueprints that he intended to manufacture.”

His vision, however, was tragically interrupted. While working on carburetor improvements in February 1900, Hieronymus lit either a pipe or cigar, instantly igniting his gasoline-saturated clothes. One week later, he died at home of his injuries. 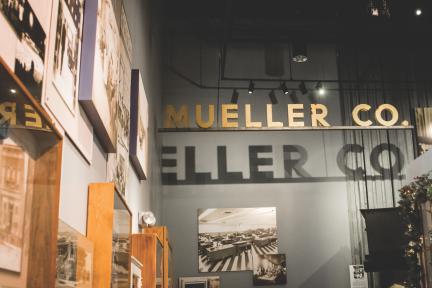 But the inventor’s footprints still mark the local landscape, and new pages in his story continue to open. In late October 2019, Mueller Company announced plans to construct a state-of-the-art water products foundry on the 2700 block of North Jasper Street — an investment that signals new opportunities and future growth.

“Every one of us is descended from someone with his or her version of the American Dream, and Mueller Company was Hieronymus’ version,” Jahr says. “The Museum presents a bigger picture of his influence than many visitors expect, and I enjoy seeing their expressions of ‘wow’ when they start connecting the dots.”

The Hieronymus Mueller Museum, located at 420 W. Eldorado, is open from 1 to 4 p.m., Tuesday through Saturday. For more information, visit www.muellermuseum.org.

Jan Mathew is a regular contributor to Decatur Magazine.

This article originally appeared in the February/March 2020 issue of Decatur Magazine. It may not be reproduced or redistributed in whole or in part without the publisher’s consent.