The torch has been passed to a new generation of Soy City restaurateurs — born since the days of Camelot; tempered by Midwest values; disciplined by economic times; proud of our heritage of first-class food preparation and presentation — and unwilling to witness or permit the slow undoing of those culinary rights to which this city has always been committed.

If this sounds somewhat familiar, at least metronomically, you’re old enough to have heard the 1961 presidential inauguration. If none of it makes any sense, you’re young enough to Google.

In either case, you likely recognize that Decatur is in the midst of a true restaurant renaissance — one that is light years ahead of the culinary world that existed here when I started writing restaurant reviews five years ago. Then, you could pretty much guess what was on the menu before you even looked at it.

Today, walk into The Gin Mill, TapRoot, Paco’s Sol Bistro, or Bizou, and you’ll swear you’re dining in Chicago or on the West Coast. Doherty’s Pub captures the feel of a typical Irish pub — the type you’d find near Union Station in Washington, D.C. Next time you travel to Florida and eat at an excellent seaside restaurant, you might find it comparable to our own Beach House — except we have much better steaks.

Complementing these are a range of restaurants with an essence that’s pure Decatur: Pop’s Place, The Wharf, The Wagon, Lincoln Square Lounge, Jan’s East End Grill, Lock Stock & Barrel, Robbies, Whit’s End, and Paul’s Confectionery. What’s the first thing Decatur natives do when they come home to visit? They go to Krekels!

“People are dining out more and more… and they’re (discovering) that it’s often cost effective to eat out in a restaurant.”

Variety is alive and well here, too. Drive up to Chicago and you’ll get one version after another of heavy deep dish pizza. No lifeguard in the world would let you go swimming for a full two hours afterwards — even if you eat only one slice. But in Decatur, you’ll find a different style and taste in pizza at Del Carmen’s than at Maustell’s, or Donnie’s Homespun, or Sloan’s Calzones. You won’t feel like you need to buy a new belt when you walk out the door, either.

And we might as well be dining in Puerto Vallarta, Oaxaca, or Guadalajara when it comes to ethnic Mexican food. The variety of entrées around town is so great that Decatur patrons often select a certain restaurant for a specific menu item to satisfy a particular craving. 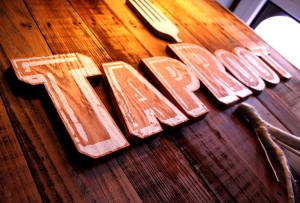 Decatur is home to 74 locally owned restaurants. The oldest in town is Paul’s Confectionery, which opened in 1924 and originally was known as the Eureka Confectionery. Krekels burst on the scene in 1949.

Our newcomer, which opened November 2014, is The Gin Mill with Chef Josh Irby. In January 2015, Paco Greenwell’s Sol Bistro received the Illinois Office of Tourism’s “Delicious Destination Award.” The criteria for this prestigious honor required Paco’s be considered a staple in the community and unique to the state; authentically Illinois; and an unforgettable culinary experience. Just order their “Bacon BBQ Shrimp” — four jumbo shrimp stuffed with pepper-jack cheese, wrapped in bacon and covered in their BBQ sauce — and get a real taste of why Paco’s is an award-winner.

How does this compare with neighboring cities to our east and west? Springfield is home to 127 locally-owned establishments. And while Champaign may have us beat in numbers of chain restaurants, the city claims only 30 locally owned spots.

Restaurateurs have an interesting take on Decatur’s dining scene. Irby believes there are niches to be filled, and that keys to a restaurant’s success are to be consistently good, keep up with trends, and put a superior product on the table.

“People are dining out more and more,” says Irby, “and they’re (discovering) that it’s often cost effective to eat out in a restaurant. 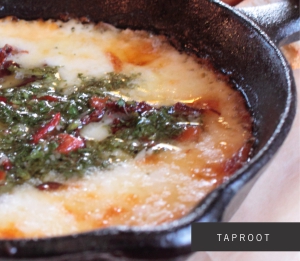 Taproot’s John Redden says he could sense a change over the last few years, and he wanted to be part of the momentum in downtown dining. People started to see what could be done on Food Network, and that menus were changing with the times. Redden feels the Culinary Arts program at Richland Community College has a positive effect, too.

When he opened Paco’s in March 2010, one of Greenwell’s main goals was to bring more people downtown by enticing them with good food and a great atmosphere.

“When downtown was remodeled, the restaurant business really started to pick up,” Greenwell says. “For me, the tricky part was coming up with the menu. What do people really want, and how do I prepare and present that in my own style?

“A restaurant is never done —there are always new challenges,” he adds. “I want to express myself in an artistic manner, because that is what’s most gratifying.”

Contributor French MacLean, who enjoyed dining out “in the day” at The Brown Jug, The Blue Mill, and Tom’s Grill, also appreciates Decatur’s new wave of favorites.